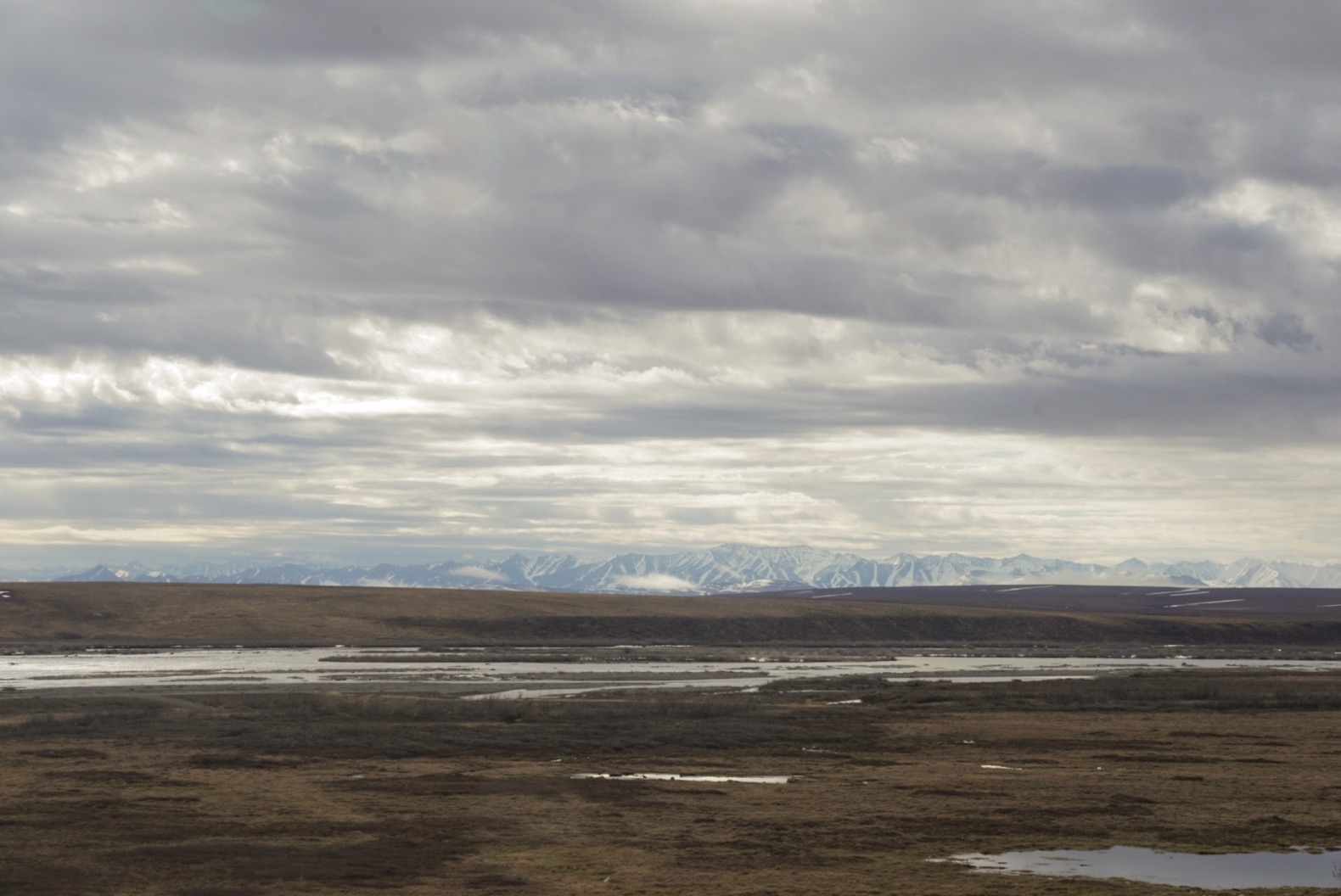 As a cyclist — this is frustrating. The construction worker was clearly trying to be helpful, but cyclists demand precision. Few other sports offer the athlete so many metrics to measure his output, down to the second, mile (distance covered), foot (gross elevation gained), watt, beats per minute (heart rate), rotations per minute (pedal strokes), and so on. The construction worker who triggered my frustration, a native Alaskan, knew something that would take me awhile to figure out: northern Alaska doesn’t submit to measures of time or distance.

We were in Deadhorse, Alaska to begin our bike trip across two continents and basically all the lines of lattitude. Deadhorse is situated on the Arctic Ocean, at the end of the Dalton Highway (the only road in northern Alaska and the “loneliest highway in the country”), 494 miles from Fairbanks and 200 miles north of the Arctic circle. Heading south from Deadhorse, you follow the Sag river for 130 miles through the tundra to its headwaters below Atigun Pass in the Brooks Range. Continuing south takes you across the Yukon River and through another hundred miles of rolling hills to Fairbanks. 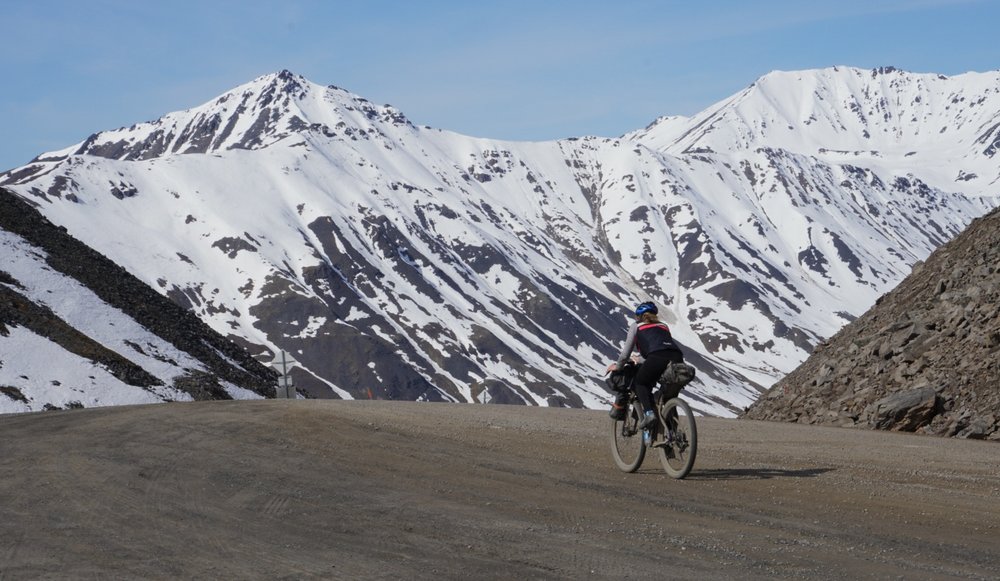 Our first day was spent in and around the Prudhoe Bay Hotel while Alaska Airlines struggled to figure out what had happened to our bicycles: according to their systems they were received at the SFO baggage counter and then fell off the face of the earth, with no evidence linking them to either of our stops in Seattle or Anchorage.

The town (more accurately a work camp) of Deadhorse owes its existence solely to the oil industry, as does the Dalton Highway which was built in 1974 in just 154 days to support the Alaska Pipeline, and opened to the public in the 1990s. Just as the promise of oil fortunes gave birth to all the development here, the declining oil prices of the past few years have drained its vitality. The cafeteria at the Prudhoe Bay Hotel only had four or five patrons at meal times, and all the roads surrounding the hotel were lined with dormant heavy machinery. An oil worker who gave us a ride back from the general store assured us that this place used to buzz with activity and that we needed only wait until the winter when ice roads could be built to see it come to life again.

After a few hours trying in vain to help the airline track down our bikes, we went to our hotel room to nap after our red-eye flight. The rooms at the hotel have substantial blinds, a necessity for the twenty four hours of sunlight Deadhorse receives during the summer months. At this extreme latitude and just days from the solstice, not only is there never any darkness, but there’s essentially no variation in the light. It’s as though time stands still, with nothing to mark its progression. The clock read that we had napped for several hours, but nature gave no evidence to confirm it.

We collected our bikes the next day and set off down the Dalton Highway. The dirt road parallels the pipeline, the only two signs of human activity cutting through the endless expanse of tundra.

I usually ride with a bike computer, but for this trip I’m forsaking it to minimize battery use. Instead, I focus on turning my pedals over and over, watching the tundra roll by in its countless shades of browns and greys. There are no landmarks to track our progress; the nearest tree is 150 miles south of us (there’s a plaque commemorating “the northernmost pine” just beyond Atigun Pass), meaning there’s nothing higher than tussocks of grass for our eyes to follow.

Our progress is variable; we’ll spend what feels like an hour to trudge up a long grade, only to fly down the descent in the blink of an eye. In one section, the dirt road devolves into a mud pit from the melting June blizzard that blew through last week, forcing us to repeatedly stop to scrape enough mud from our tires to allow them to spin. We’re lucky to manage a walking pace. 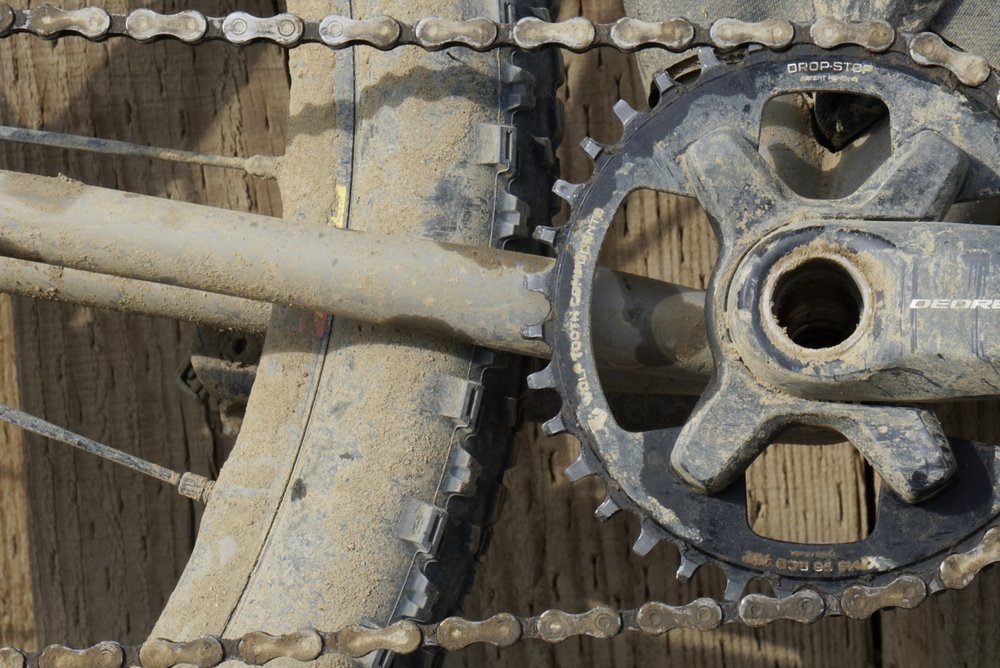 Nothing changes as we continue. The light forcing its way through the overcast sky is the same as its been since we arrived in Alaska, and the landscape remains as essentially featureless as ever. The only thing to do is to keep turning the pedals over and over.

Eventually, Caitlin catches me by surprise by declaring that it’s time to stop for the day. It shocks me even more to learn that it’s past midnight. We’d been riding for more than ten hours, and I had no idea. Left to my own devices, without the sun’s natural arc to track the passing hours nor landmarks the passing miles, I feel like I could have kept riding forever. Even the animals lose track of daily cycles up here; failing to reach consensus on when to sleep, sing and hunt. 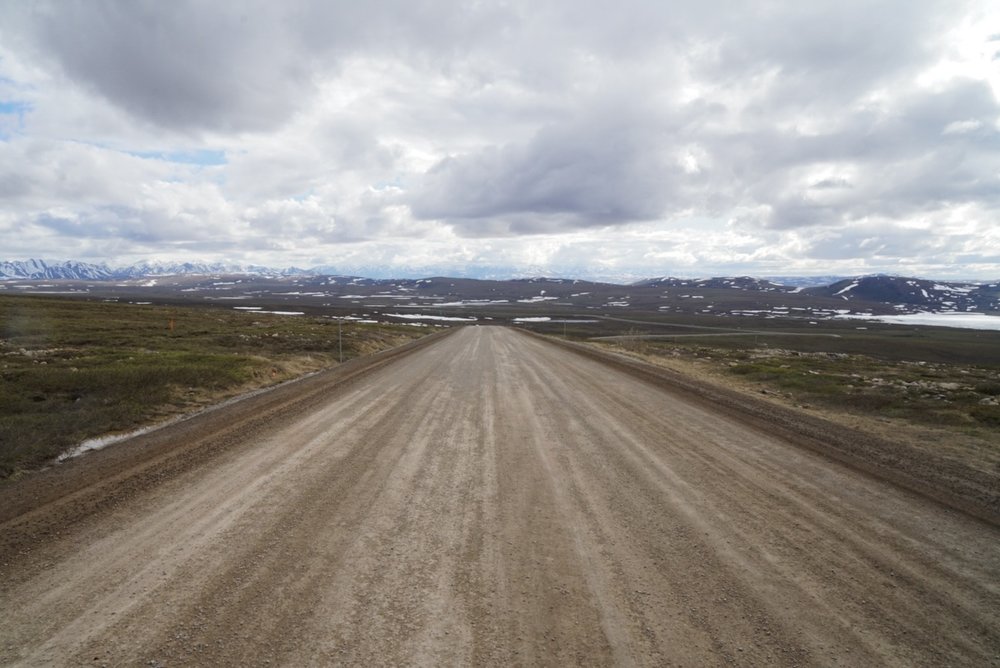 As we set up our tent, I notice an informational sign nearby, discussing the grasses that make up the tundra. Decomposition is slowed by the constantly cold weather, somehow resulting in distinctive tussocks of grass, unsteady piles of biomass that protrude from the soggy soil. The sign claims that walking even a mile across this terrain can feel like it takes a lifetime.[1]

Climbing into the tent, the sun shines as ever. I pull my buff over my eyes, imposing my night on the unyielding tundra.

[1] Not to be confused with a walk that should literally take a lifetime, such as one completed in Deadhorse just two weeks ago by a man named Cargo. He walked the length of South and North America, essentially doing our trip in reverse, except on foot. He was forced to walk the last two thousand miles on crutches after tearing a tendon in his foot, and had a near fatal encounter with a grizzly bear only a couple days from the finish. I swear, every time you think you’re doing something impressive, there’s some weirdo to put you in your place.