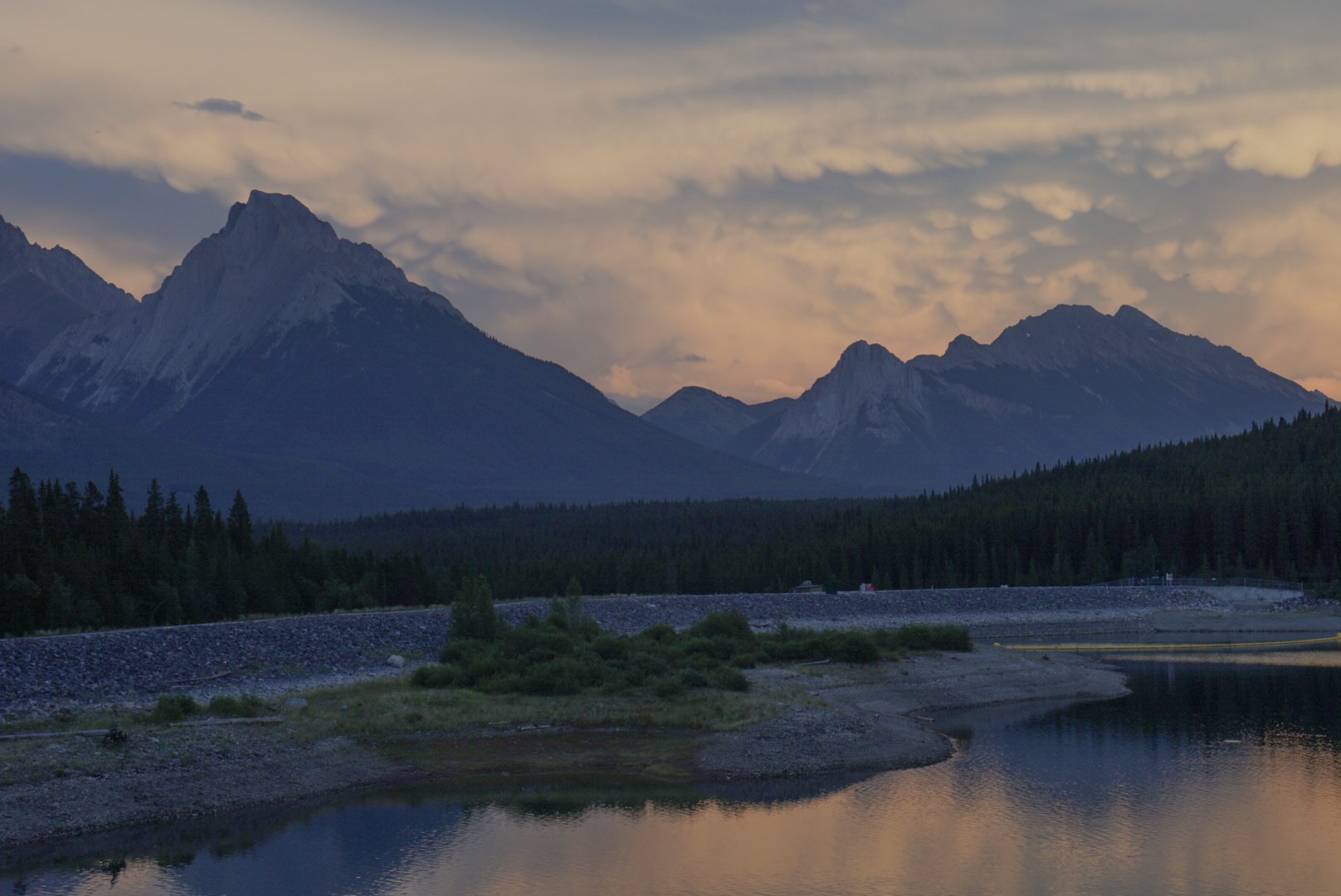 Of Mountains and Mud

Is this what riding off-road means? 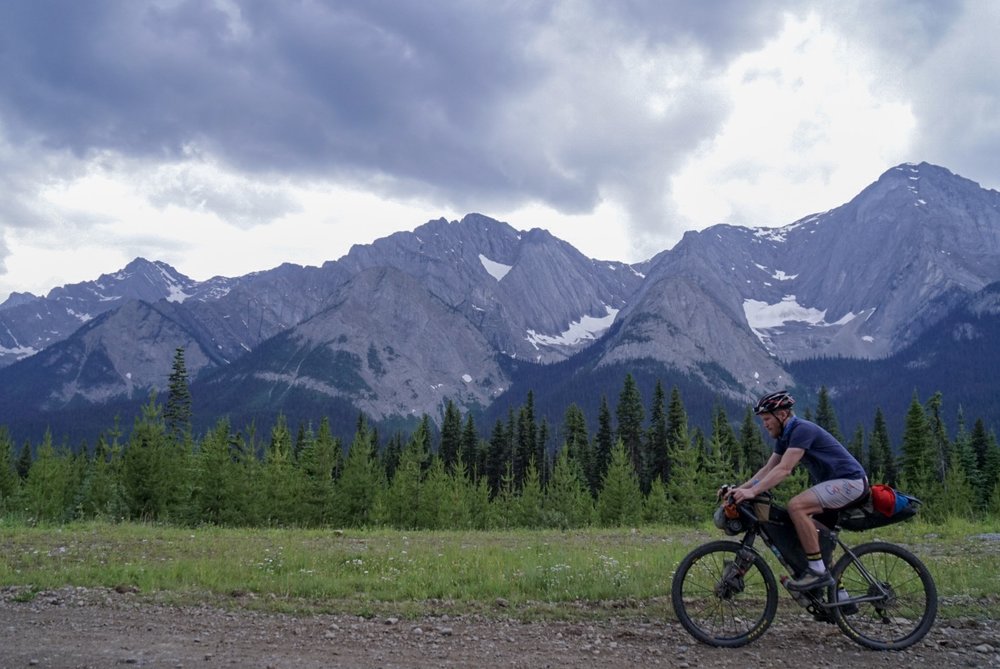 The mud pulls at my feet and tires, holding me firmly in place despite Herculean efforts. I push for five wheel rotations at most before the muck changes to cement that clogs my drivetrain and fork, stopping the wheels from turning. Pushing, then scraping mud, then pushing, then pulling, then dragging with wheels not spinning, then carrying, then pulling the bags off and trying to push again. I try every way of making a bicycle travel forward. Devon appeared to have been struggling too, but he’s now out of sight beyond the next bend. Soon, I’m covered in several pounds of the muck myself, searching for signs ahead of when the road may improve.

Just days ago, I had been strongly anticipating the Great Divide Mountain Bike Route (GDMBR). Then four weeks into our trip, I was having epiphanies about my new freedom as I glided gracefully along smooth pavement with views of turquoise lakes, craggy peaks and glaciers. Free of any obligations, I felt like my only job was to fully appreciate the beauty of the spectacular places we labored to travel, and that felt amazing. I anticipated the joy of a new twist in our adventure with this next section and what new realizations I might feel. 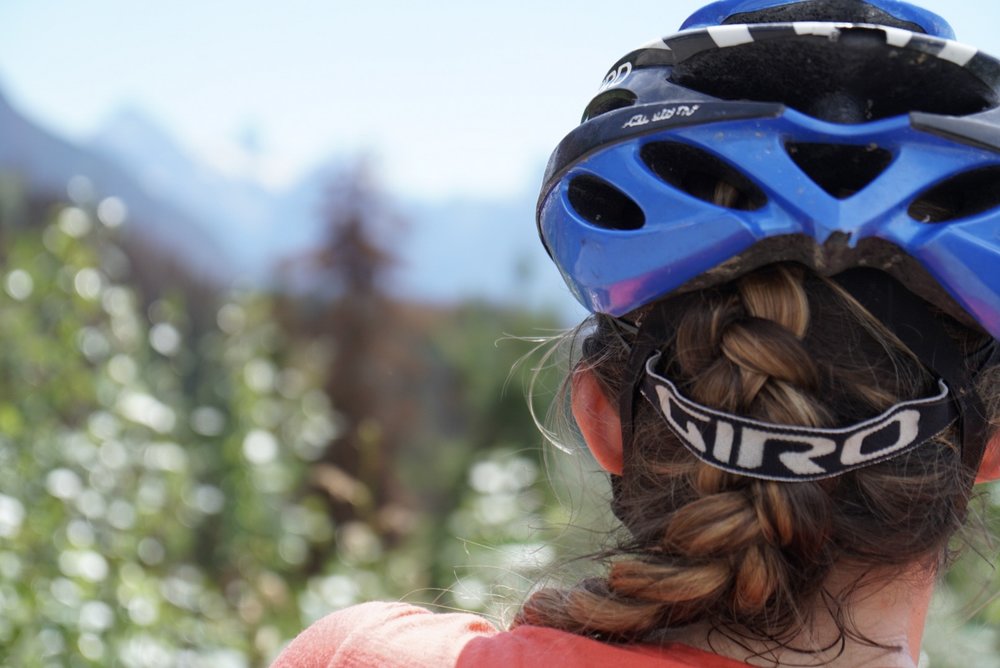 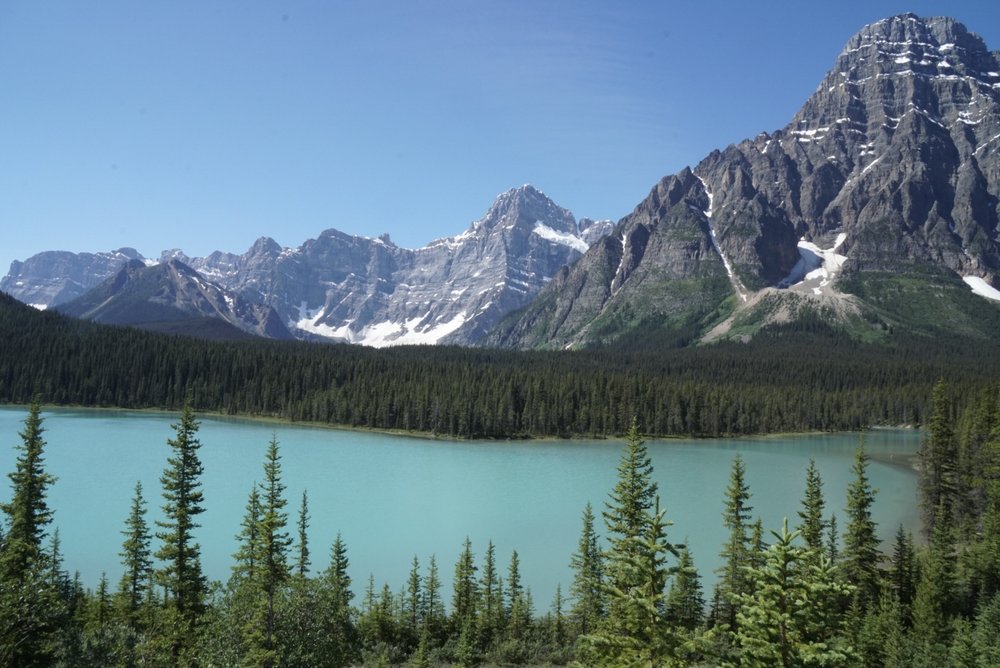 At this point, we had ridden 2,800 miles from Alaska to Canada, which culminated in some of the most spectacular scenery yet at Jasper and Banff. Since the Dalton Highway, we had mostly been riding pretty good pavement, so we were logging more than 100 miles a day and were well ahead of schedule. After we turned off the Alaska Highway, our route took us along the Cassiar Highway, a beautiful, low-traffic road lined with wildflowers and constant views of mountains, glaciers, lakes and rivers. There were countless bear sightings. My favorite was the mama bear and cubs that scrambled away through a field of wildflowers when they heard me coming. One cub climbed up a tree and looked down at me with pleading eyes. After the Cassiar, we followed the Yellowhead through beautiful farmland but more traffic, which made us anxious to get to our off-road route. We enjoyed a farm-to-table supper with a Warmshowers host and joined them to set up their stand at the farmers’ market the next day. Fresh vegetables and grass-fed beef felt like a major indulgence after 2,000 miles of truck stop food and backpacking meals. Finishing this first major section of our journey in Jasper and Banff felt like a celebration as we took in views of one of the world’s most beautiful places and then indulged in some rest and relaxation in Canmore. 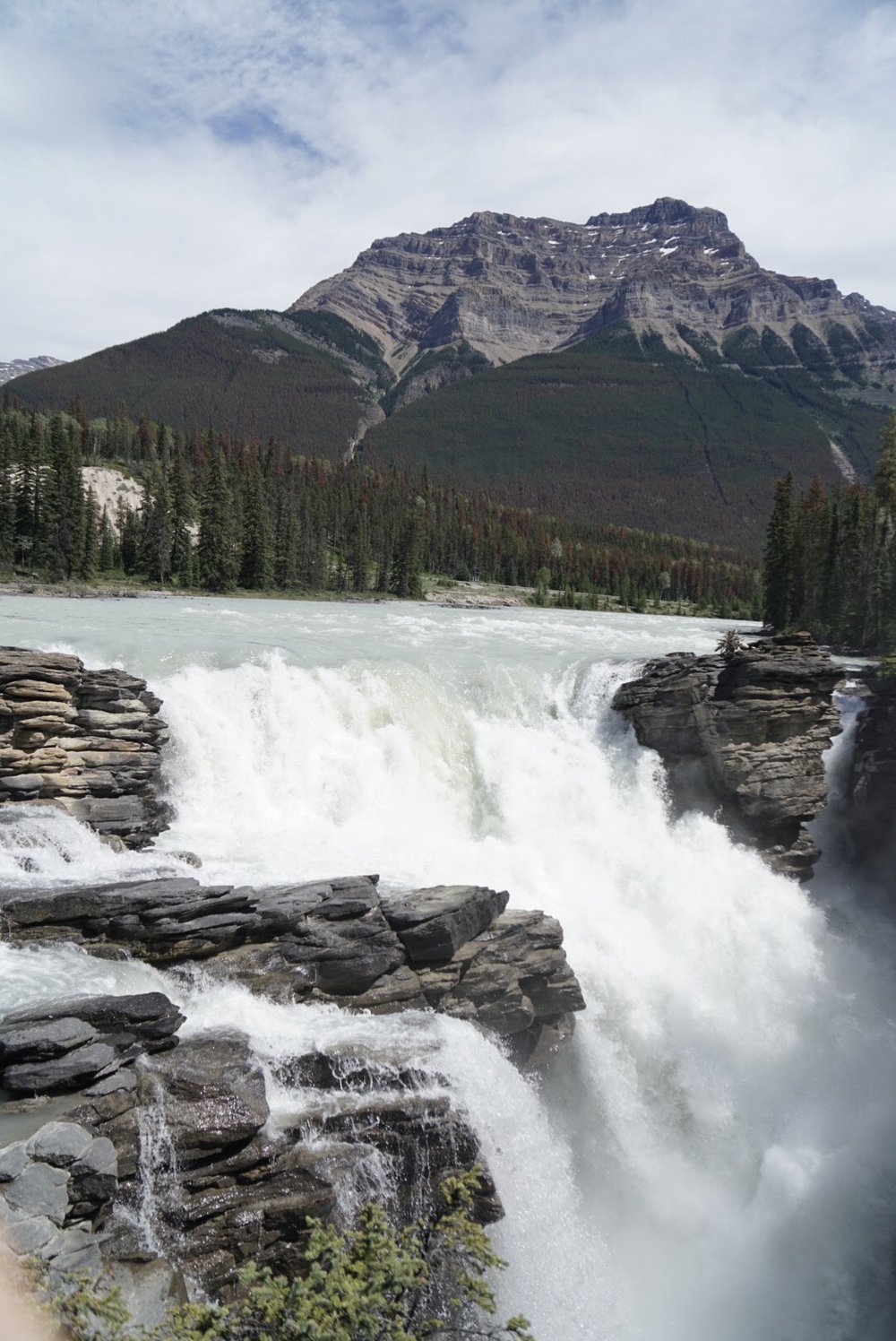 From Canmore, we took off on the GDMBR and found ourselves in that mud on our first full day. This off-road route follows the Rockies from Banff to Mexico, and we intended to mostly follow that to southern Colorado before heading West towards Baja. All of a sudden as I stood in that mud, Colorado felt like a long way to bike despite the distance we had already accomplished. We have had so many beautiful experiences so far on this adventure, but thoughts of frustration and fear are frequent too. 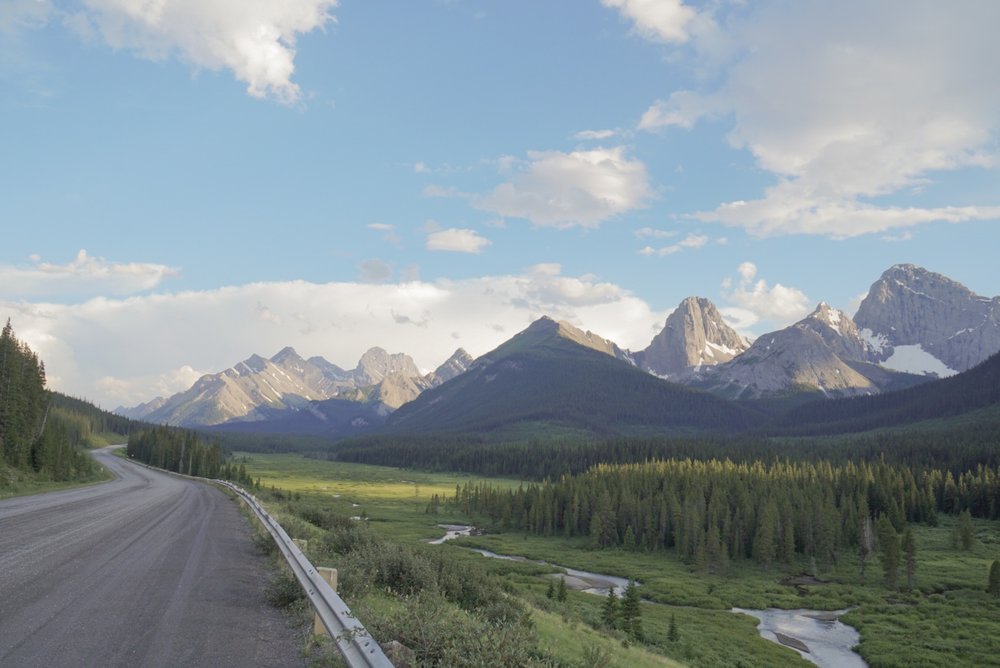 I remember a tough day on the Dalton Highway when my heart sunk at the sight of every steep hill. I cursed the rugged landscape; I cursed the builders of that road; I desperately searched the terrain ahead for a way out of the relentlessly jagged surface. Most of all, I kept letting myself wonder why I deserved yet another gigantic, steep hill after scaling so many others on my worn out legs. Don’t I deserve the progress of a few easy miles? 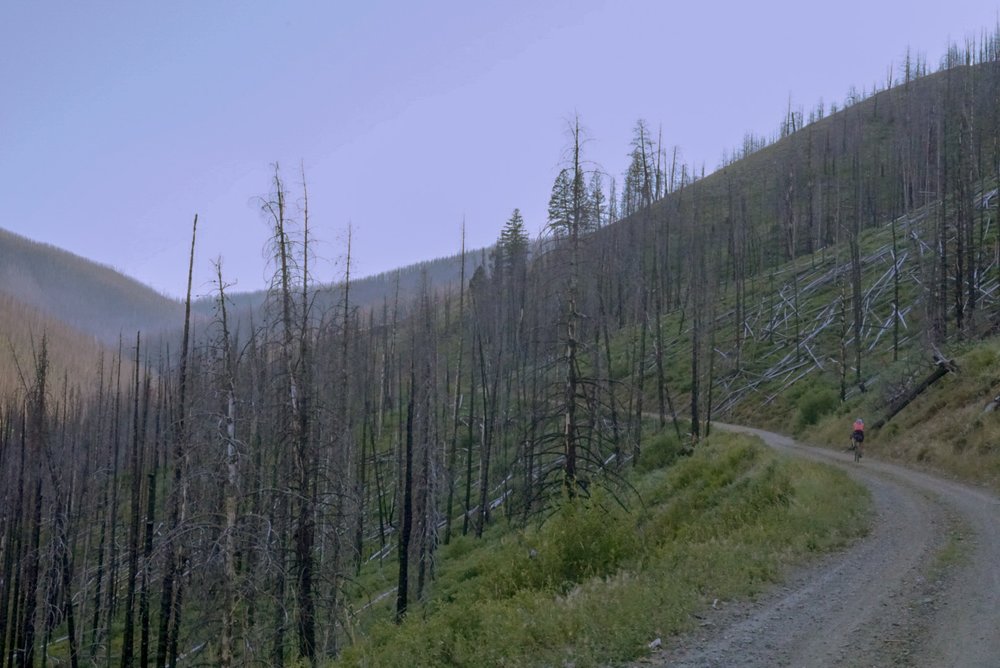 The next day, I was better fed and caffeinated after making it to one of the restaurants on the Dalton Highway (the destination I had been pushing so hard for the day before), and I started off in better spirits. I felt a mental shift too. I made a conscious decision to expect the hills. I even looked forward to the feeling of accomplishment of getting over each one. Hadn’t I signed myself up for an off-road journey through mountains to Argentina? And I had been cursing hills? All of a sudden, I was climbing hills faster and feeling excited at the top of each. I was grinning instead of grimacing (at least most of the time). I felt the same ache in my legs, but it didn’t crush me like it had the day before. I observed the pain almost like it was a distant feeling, and that let me push beyond it. It was almost meditative, like observing unwanted thoughts and pushing them away in the pursuit of a clear mind. I appreciated my strength; I appreciated the beauty of the road; and I appreciated that someone chose to labor to build this road through such a rugged landscape. I also appreciated how much better I felt just by setting the right expectations and approaching the challenges differently, and I remembered how much control I have over my enjoyment at every step (or pedal stroke) of this journey. 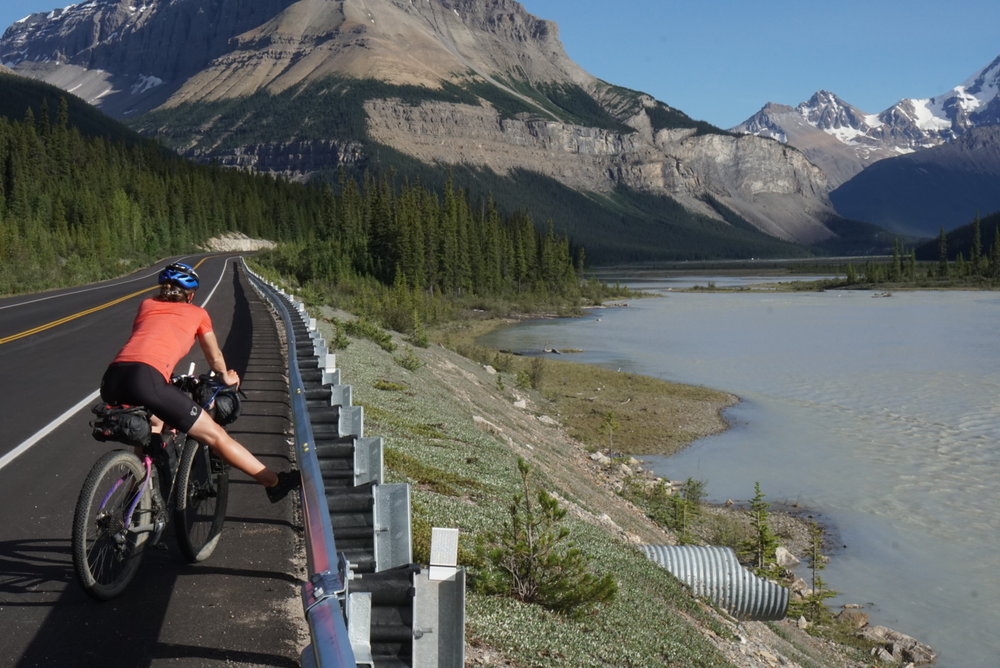 I’ve been through this mental fight before, sometimes winning and sometimes losing. It’s only long after my own competitive athletic career had ended that I have even started to understand it. I’ve been exposed to it though ever since I was a little kid “crewing” at my parents’ ultra marathons. I think that exposure is what set the tone for my ability to win that fight. I watched my parents and other racers stumble, throw up, faint, bleed, crawl and then run again at mile 90 on an oxygen-deprived mountain trail. Setting that as a normal thing in a five-year-old’s mind changes how that little kid looks at something that’s physically challenging. A couple years later, I was running 5K races and pushing myself to the point of falling over at the finish line as a seven-year-old. Whatever it was, it was definitely in me too. All the Hewitt children ended up this way. Ask my little sister Abby about the Ironman she trained for primarily with barre class. No, this was not a testament to barre as a miraculous exercise regimen but rather to a Hewitt’s ability to suffer. It’s certainly not unique to Hewitts, but we’ve had enough exposure to it to have the confidence to try. 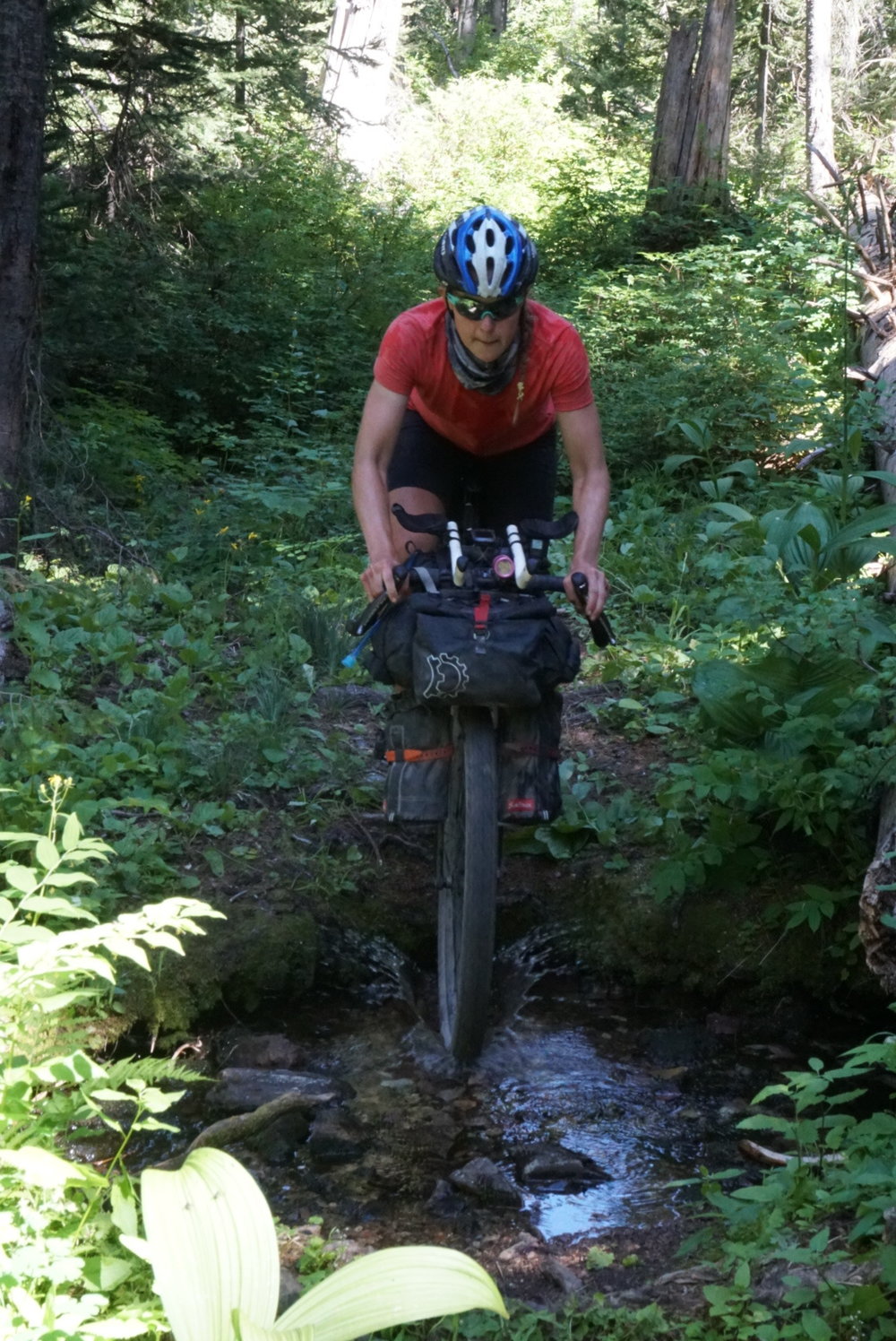 Even understanding what it takes to keep pushing isn’t enough though. It’s a constant struggle, and one I find I lose most frequently when I’m on the emotional rollercoaster sparked by the deadly combination of hunger, hills, and headwind. Most recently, it was the long singletrack section around Fernie, British Columbia. A beautiful trail, but we might as well have taken the day off on our pursuit to Argentina, dropped our bags and gone for a mountain bike ride. The circuitous, needlessly hilly route was painful to follow as I thought about the easier parallel road we could have zipped through in twenty percent of the time. But I pushed myself to think about the beauty of the trail, the fun change of pace of the flowy trail, and to remember that this trail was sort of a microcosm of our larger adventure. There were an awful lot of ways that were faster to get to Argentina than the one we chose. Ours was circuitous and needlessly hilly by choice. Again, why should I expect my trail to be easy? Where is the adventure and joy of accomplishment in that? There’s nothing like the feeling of descending in the sunset after summiting a 5,000 foot climb in the Bitterroot Forest, or having a beer at Fernie Brewing after 10-hours of muscle-cramping ups-and-downs, or floating in the pool at Triple Creek Ranch after biking in the 100-degree heat. You simply can’t experience joy on the same level without the contrast of the challenge, nor can it be an adventure without the loss of some control. 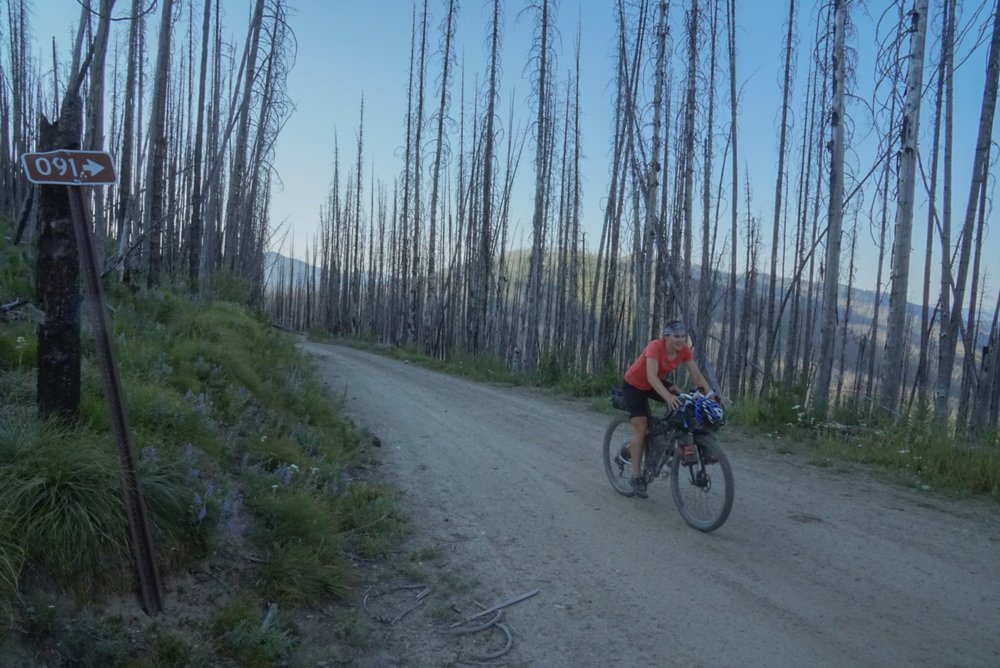 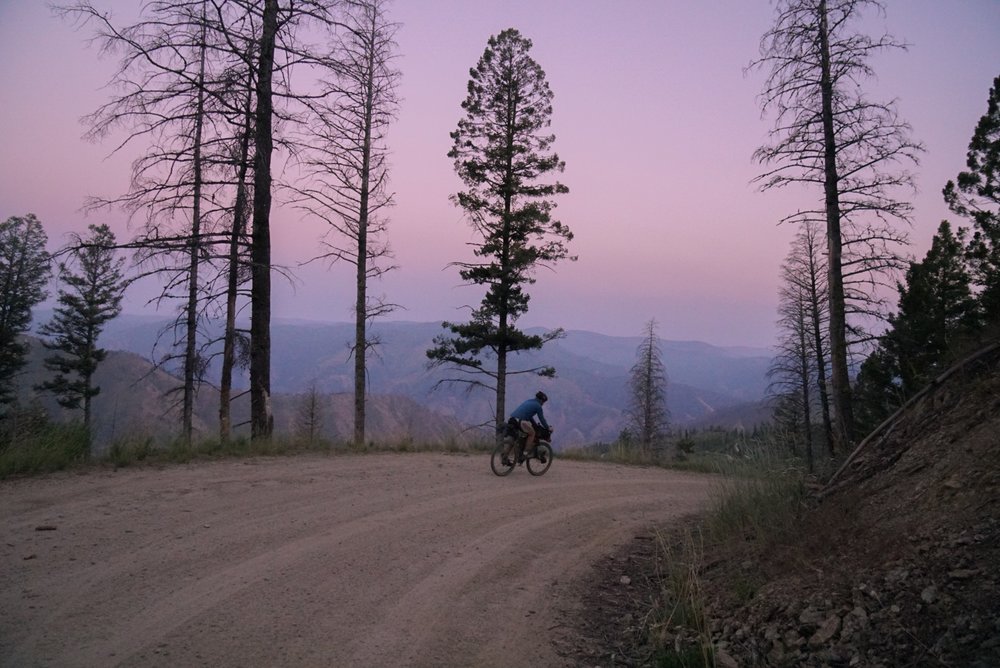 But don’t let this worry you that we aren’t enjoying any easy, peaceful moments on this more challenging section. Recently, after a dip in the famously clear Flathead Lake, we cruised along toward our campsite basking in the warm, rosy glow of dusk while marveling at a deep red sunset that we enjoyed doubly due to its perfect reflection in Swan Lake. It’s not the first time on this trip that I thought I discovered perfect bliss. I think I’m learning to appreciate fully—and almost equally—the beautiful and the challenging moments on this adventure. 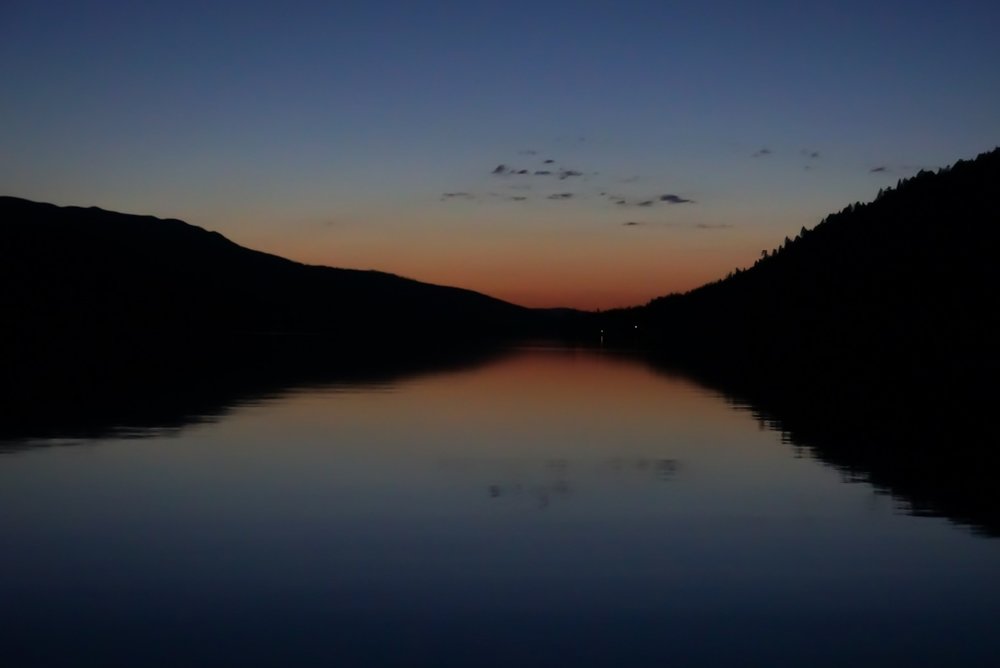 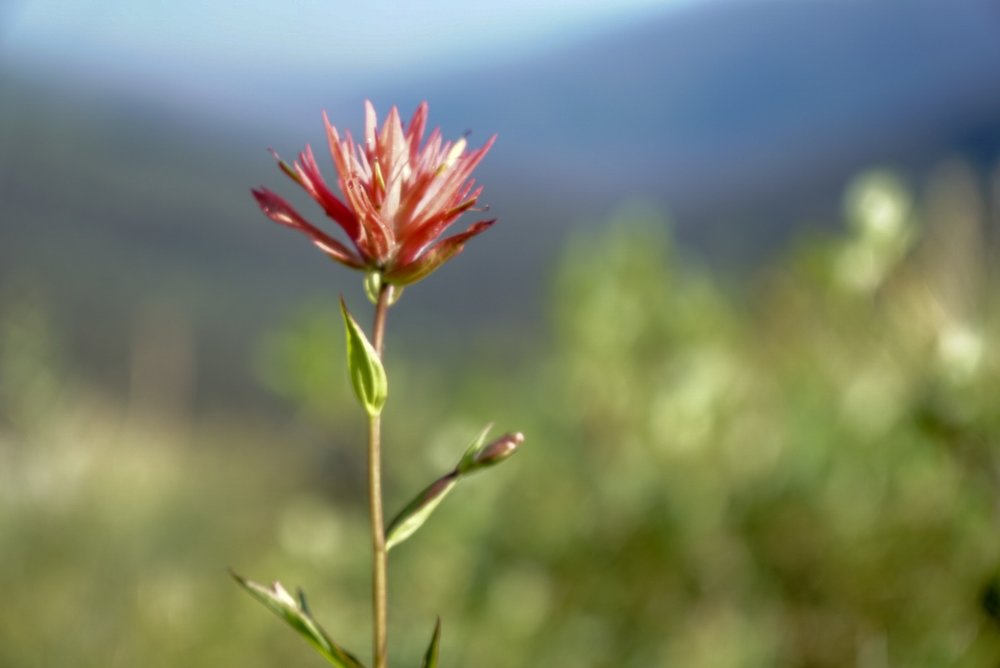